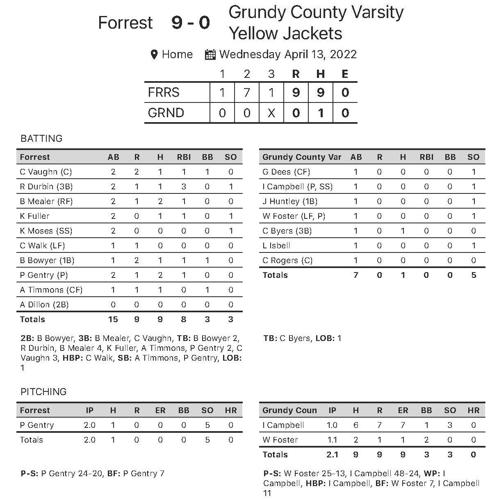 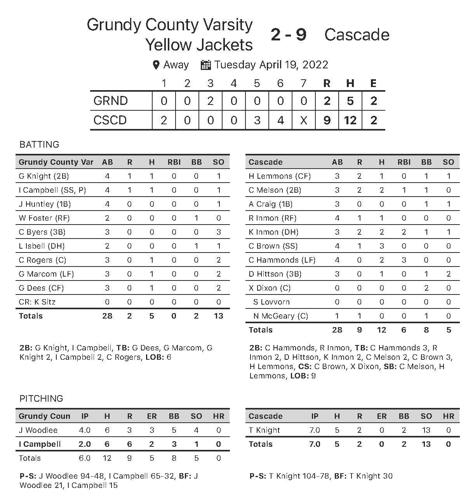 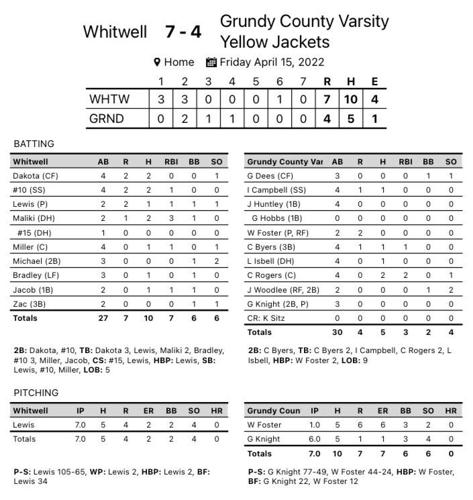 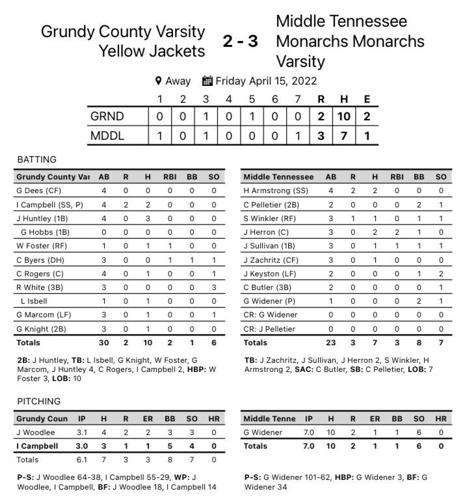 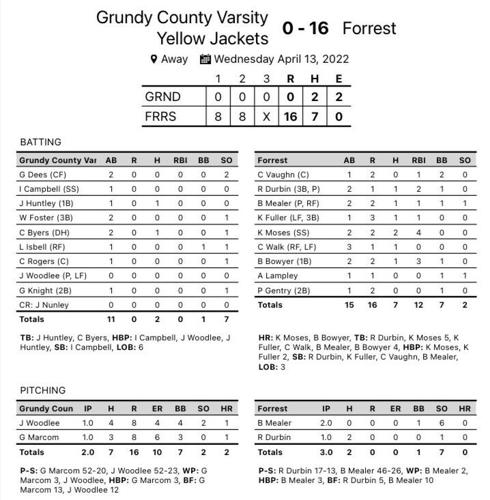 The Yellow Jackets were unable to salvage a win over their past five games. Four different opponents outscored the young GCHS squad 44-8 over the series of contests.

Grundy (3-17) fell at Forrest High School in a doubleheader last Wednesday and dropped games at home to Whitwell and the Middle Tennessee Monarchs at the Mountain Valley Classic two nights later. The Jackets’ most recent defeat was a 9-2 loss at Cascade on Tuesday.

Forrest, the first-place team in the district, tossed back-to-back shutouts against GCHS. The Rockets took a 16-0 decision in the mercy-ruled first game and claimed a 9-0 win in the rain-shortened second game. FHS pitchers scattered three hits over five innings.

The Rockets jumped out to a quick eight-run lead in the first game’s opening inning and matched their run total in the second frame to go ahead 16-0.

The Jackets collected both of their hits in the top of the third with hopes of keeping the game alive. Jarrod Huntley and Charles Byers each singled in the inning, but neither could push a run across before the deciding third out.

Grundy managed to hold Forrest to nine runs in the night’s second game, but Mother Nature ended the game early in the top of the third. Byers had the Jackets’ lone hit in the loss.

GCHS looked sharper at its home tournament Friday in the Mountain Valley Classic but came up short against Whitwell and the Middle Tennessee Monarchs, a home-schooled program.

Whitwell topped the Yellow Jackets 7-4 in the tournament’s opening game. The Tigers went up 6-0 after two trips to the plate, but Grundy battled back with two runs of its own in the bottom of the second.

Will Foster was hit by a pitch to begin the frame and Byers followed up with a double to score the sophomore. One batter later, Colton Rogers lined a single to left to score Byers.

Runs in the third and fourth pulled Grundy within two scores of the Whitwell lead. Rogers’ second hit was a liner to left to score Byers again, and Huntley added a run on a dropped fly ball.

Despite chipping away at the WHS advantage, the well ran dry from the fifth inning on. The final run was insurance for the Tigers in the top of the sixth.

Foster had a rough start on the bump, going one inning while allowing six runs on five hits, but Gavin Knight was stellar out of the bullpen. The freshman tossed the final six innings, struck out four and allowed just one run to cross.

The Middle Tennessee Monarchs got a walk-off, 3-2 win over the Jackets in Friday’s nightcap. GCHS battled back from a one-run deficit twice to tie the game, but it was enough to overcome heartbreak in the seventh.

Trailing 1-0, GCHS designated hitter Byers reached on an error to score Isaac Campbell in the third, and Foster singled through the left side to bring home Campbell in the fifth.

With the game tied 2-2 with two on and one out in the bottom of the seventh, Campbell intentionally walked the bases loaded to face John Sullivan. Campbell got a first pitch strike, but Sullivan floated the second pitch into left field to plate the game’s winning run.

Grundy out-hit the Monarchs 10-7 in the game. Huntley accounted for three hits, including a double.

GCHS ended the five-game stretch Tuesday with a 9-2 loss at district-foe Cascade. The game was knotted 2-2 after the third, but the Champions caught fire in the fifth and scored seven runs over the next two frames to secure the win.

Both Yellow Jacket runs came on one swing of the bat in the top of the third. Huntley hit a sharp grounder to short that resulted in an error. Knight and Campbell scored on the miscue.

The Jackets return to GCHS Monday to host Forrest at 5 p.m. They wrap up the two-game homestand Tuesday against Cannon County at 5 p.m.