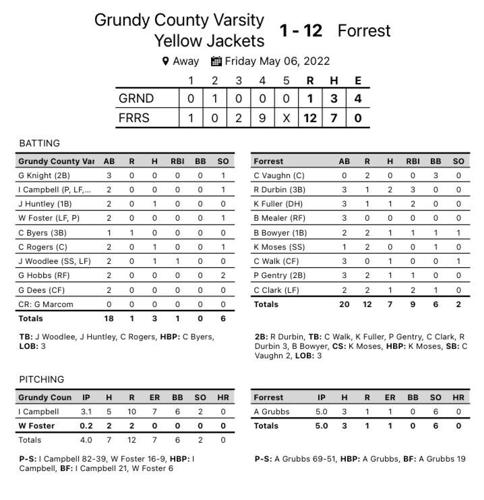 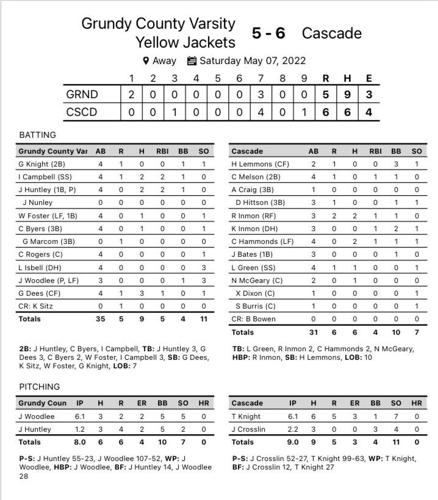 Losses at Forrest and Cascade last week eliminated the Grundy County baseball team from the District 7-2A Tournament.

The fourth-seeded Yellow Jackets (4-23) fell 12-1 to top-seeded Forrest in the opening round last Friday before a tough 6-5 loss in extra innings to Cascade on Saturday knocked GCHS from the postseason.

Following the loss to Forrest, Grundy dropped to the losers bracket for a matchup with third-seeded Cascade.

The game went the distance and then some before coming to a heartbreaking end in the bottom of the ninth.

Huntley put GCHS on the board with a two-run single in the first and Isaac Campbell doubled home two in the seventh to give the Jackets a 5-1 lead. Woodlee cruised through six innings on the mound, striking out four and walking just three, but trouble arose in the bottom of the seventh.

Woodlee recorded his fifth K and walked the next batter. With one on and one out, Huntley entered from the bullpen. The reliever gave up an RBI single and gave up a bases-loaded walk, but picked up the inning’s second out on a strikeout. With the bases still loaded, an error allowed the tying run to cross. Huntley escaped the inning two pitches later on a popout back to the bump to send the game to extras.

The next and final run of the game scored in the bottom of the ninth. Following a pair of walks, Champions left fielder Caden Hammond singled on a flyball to right to plate Ryan Inmon for the walkoff win.

Grundy out-hit Cascade 9-6 despite the loss. Campbell and Huntley were both 2-for-4 with a pair of RBIs each, while Garret Dees was 3-for-4 with an RBI. Will Foster and Charles Byers rounded out the offense with a hit each.

The young GCHS baseball team finished the season with a 4-23 overall record and a 0-13 mark in district play.