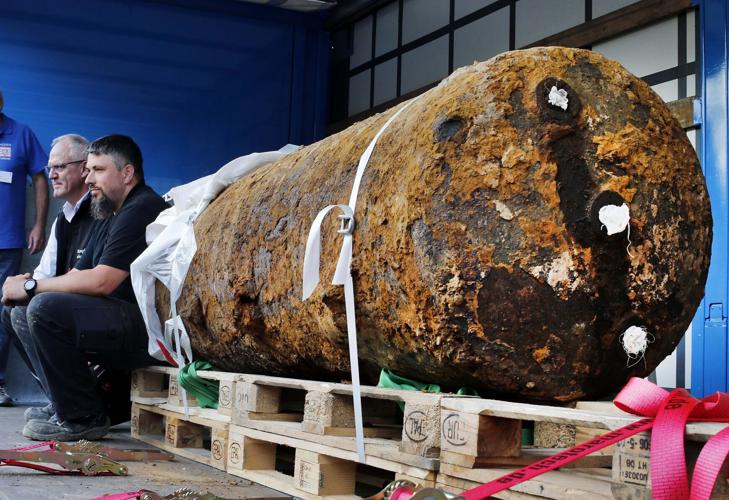 Disposers Dieter Schwaetzler, left, and Rene Bennert sit next to 1.8 ton WWII bomb right after they defused it, in Frankfurt, Germany, Sunday, Sept. 3, 2017. 70 000 people had to be evacuated. Police say bomb disposal experts have successfully defused a huge World War II-era bomb in the German financial capital Frankfurt that forced the evacuation of more than 60,000 residents. (AP Photo/Michael Probst) 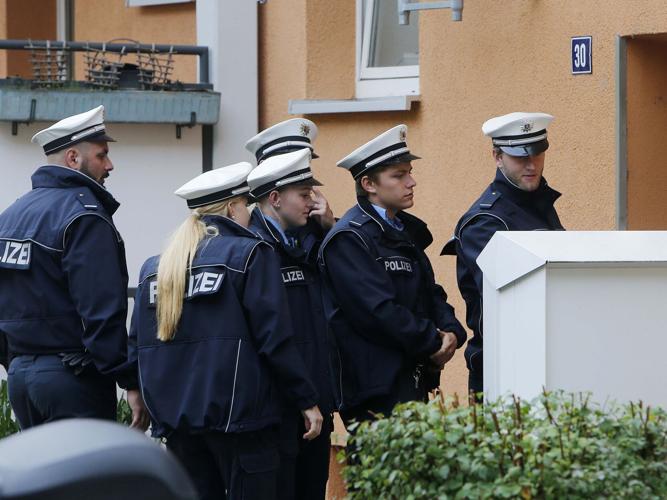 Police officers stand in front of a house when checking door to door during an evacuation of more than 60 000 people in Frankfurt, Germany, Sunday, Sept. 3, 2017. The evacuation became necessary due to an unexploded 1.8 ton WW II bomb that will be diffused later the day. (AP Photo/Michael Probst)

Hospital patients and the elderly were among those affected in what was Germany’s biggest evacuation in recent history.

Construction workers found the 1.8-ton (4,000-pound) British bomb Tuesday. Officials ordered residents to evacuate homes within a 1.5-kilometer (nearly a mile) radius of the site in Germany’s financial capital. Dozens of ambulances lined up early Sunday to pick up anyone unable to independently leave the danger zone.

The high capacity bomb, also dubbed a Blockbuster, was one of thousands dropped over Germany by the Royal Air Force during the final years of World War II to cripple the Nazi war machine and demoralize the German population.

Authorities warned that if the bomb had exploded, the shock wave could have caused widespread damage throughout the western part of the city.

Unexploded bombs are still found regularly across Germany, even 72 years after the war ended. About 20,000 people were evacuated from the western city of Koblenz before specialists disarmed a 500-kilogram U.S. bomb there Saturday.